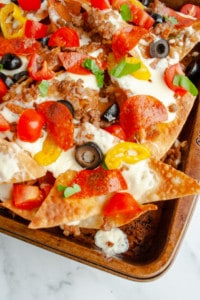 There's nothing quite like the joy of eating at a restaurant and seeing a giant plate to cheesy loaded nachos coming your way. Nachos are a popular appetizer that are so simple and versatile. There seems to be an endless variety of meats, cheese and veggies that you can melt together on a big pile of chips for a delicious appetizer or game-day food. I'm switching things up with these Italian Nachos by switching some of the traditional Mexican flavors and ingredients for some with an Italian flair. I love creating my own version of "fusion" recipes, remember my Italian Egg Rolls?

A restaurant here in the town I live used to serve a version of these Italian Nachos (surprisingly it wasn't Johnny Carino's), and from the first time I had them I was hooked. The restaurant has closed since then (should've kept serving the Italian nachos!), so I knew I had to recreate them at home. I added a few new touches and thus, these Italian Nachos were born.

The basic method for traditional and Italian Nachos is the same. Chips topped with meat, veggies & cheese melted in the oven. The switching up of ingredients is what makes these Italian Nachos a fun, new way to enjoy them. 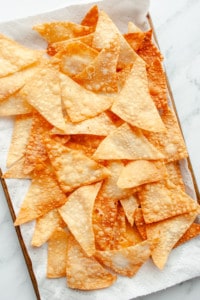 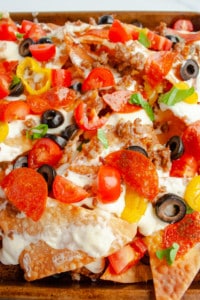 To assemble the Italian Nachos, start by laying out about half the wonton chips on a sheet pan. Top with half of all the toppings except tomatoes and half the alfredo sauce. Top with another layer of chips and the rest of the toppings and sauce. Place the nachos under the broiler for 3-4 minutes. This goes whenever you are using the broiler, but watch the pan closely! You just want the cheese sauce to get bubbly, and the wonton chips can burn very easily. Remove the nachos from the oven and top with the diced tomatoes and fresh parsley. Serve immediately!

Do I Have To Use Heavy Cream?

One of my favorite quotes from Julia Child is "if you're afraid of butter, use cream". The heavy cream is what makes the alfredo sauce thick and creamy. You could use all half & half, but keep in mind that your sauce will not thicken as much. Don't want to buy both heavy cream and half & half? It's simple to make your own half & half! As the name implies, half & half is half cream and half milk. Simply mix together ½ cup of cream and ½ cup of whatever percent milk you have in your fridge. If using skim milk, I'd change the ratio to about ⅔ cream to ⅓ milk. 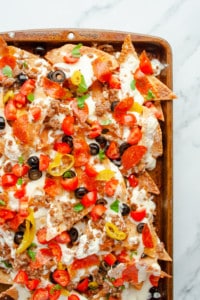 Can I Use Jarred Alfredo Sauce?

In a pinch, a 15 oz. jar of your favorite jarred alfredo sauce will work for this recipe. If at all possible, I would encourage you to make your own. It's so easy and I think there's truly no comparison. 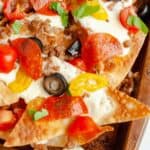 In a pinch, jarred alfredo sauce will work for this recipe.