A shortcut recipe that doesn't skimp on flavor! This No-Churn Blueberry Cheesecake Ice Cream has an unmistakable cheesecake flavor mixed with a homemade blueberry sauce & graham crackers. Grab a scoop (or two) for a sweet treat! 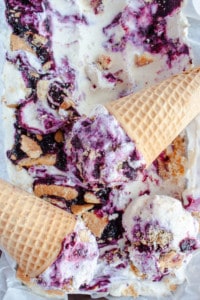 I scream you scream, we all scream for No-Churn Blueberry Cheesecake Ice Cream! Whew, that's a mouthful! Let's be honest, I'm an equal opportunity ice cream consumer so I'll scream for any kind. I'm a firm believer that there's always room for ice cream. When my daughter was a baby she had a pink shirt that read "all I want is ice cream". I've never wished so much for there do be an adult version of a kid's shirt before. With the variety of flavors and combinations, ice cream is such a versatile go-to dessert that can be enjoyed year round!

What Is No-Churn Ice Cream?

As someone who loves to cook and bake, there seems to be an endless amount of machines or gadgets that perform a certain function or method of cooking. A few years ago, my husband gifted me with this ice cream maker attachment for my stand mixer. It's a great tool and I love using it to make traditional churned ice cream, but I'm always looking for ways to make things easier and more accessible to everyone. The best thing about this No-Churn Blueberry Cheesecake Ice Cream is that no special equipment, like an ice cream maker, is required!

The base for any no-churn ice cream includes:

The basic base for a no-churn ice cream includes these same 3 ingredients. Using these along with the basic method, the world is your oyster (or ice cream cone) when it comes to the many types of ice cream you can make. Add in different kinds of fruit, candy, brownie chunks or cookie pieces for any kind of ice cream your heart desires! 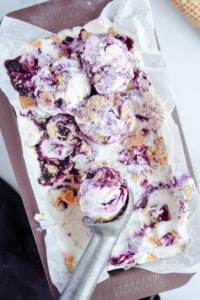 1.Blueberry sauce - bring blueberries, sugar, lemon juice & cinnamon to a simmer and cook for 5 minutes. Frozen blueberries would also work for this recipe. Mash the blueberries with the back of a spoon while cooking to break them apart. After 5 minutes, whisk in a mixture of cornstarch & cold water. Cook another minute or so until the sauce has thickened. The sauce should nicely coat the back of a spoon when it has thickened. Place the sauce in a bowl and cool completely. You could also make this sauce a day or so in advance so it's cooled and ready to go. 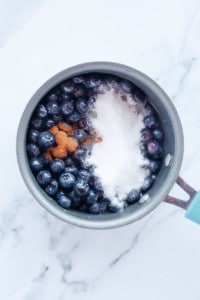 2. Cream base - in a metal bowl whip heavy cream until stiff peaks form. To check for stiff peaks, lift the mixer beaters upside down. If the cream creates a point that stands up and doesn't fall, you've reached stiff peaks. This is the shortcut version of a churned ice cream. Beating the heavy cream incorporates air into it, resembling a sped-up churning process. The key to perfect whipped cream is to use a clean, cold metal bowl. You want to make sure the bowl is clean from any residue as this can effect how the cream whips. Before adding the cream, I like to stick the bowl in the freezer for about 10 minutes. Cold cream whips better so adding it to a cold bowl helps keep it that way.

3. Cheesecake mixture - you can't have cheesecake without cream cheese! In a separate bowl combine softened cream cheese, sweetened condensed milk and vanilla. Mix well. If there are a few small chunks of cream cheese left, that's okay. Trust me, it's not the worst thing to get a little piece of cream cheese while enjoying this ice cream. Next, gently fold in the whipped cream until no white streaks remain.

4. Assembling the ice cream - now that all the components are ready, it's time to assemble the ice cream and get it in the freezer. Line a standard loaf pan with parchment paper. Lining it with parchment helps prevent icing around the edges. Place about ⅓ of the ice cream mixture in the bottom of the pan (just eyeball it).  Dot with about 6 spoonfuls of blueberry sauce, leaving some of the cream showing and sprinkle with chunks of graham cracker. Repeat this process 2 more times layering the ice cream mixture, blueberry sauce and graham crackers. Then, using a butter knife swirl the mixture to give the No-Churn Blueberry Cheesecake Ice Cream it's signature streaks of blueberry, cream and graham cracker.

5. Freeze! - cover the ice cream tightly with plastic wrap and freeze for at least 6 hours. No-churn ice cream tends to freeze harder than traditional, so I recommend removing it from the freezer about 10 minutes before scooping. Run your ice cream scoop under hot water and scoop into a dish or ice cream cone.

Kept tightly covered in a loaf pan, this No-Churn Blueberry Cheesecake Ice Cream should last about a week in the freezer before ice crystals could start to form (although I'd be surprised if it lasted that long). There are also these ice cream containers available that provide more of an airtight seal for storing ice cream for a longer period of time. 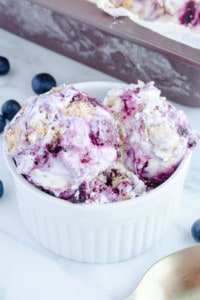 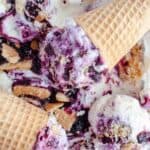 Frozen berries would also work in this recipe. The ice cream will keep up to a week in the freezer. Using the base of heavy cream, sweetened condensed milk and vanilla you can add a variety of mix-ins to create different ice cream flavors!