Jump to Recipe Print Recipe
These Greek Pita Pizzas are a fun twist on veggie pizza. Pita bread is topped with hummus, an easy Greek salad and feta cheese. Serve as a party appetizer or light lunch that is both healthy and packed with flavor! 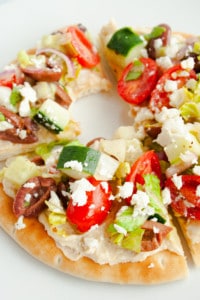 One of my favorite appetizers is cold veggie pizza that is traditionally made with a crescent roll crust topped with a sour cream & herb sauce and tons of fresh veggies. The fresh, crisp veggies are a refreshing addition to a smorgasbord of other appetizers.
I love these Greek Pita Pizzas for the same reason. This recipe really allows the vegetables to take center stage and be enjoyed in their pure form. These pizzas are made on mini pita breads that can be cut into triangles and served as an appetizer, or as more of a personal pizza for a light lunch.

The ingredients for these Greek Pita Pizzas include a combination of fresh vegetables and a handful of store-bought helpers to make the perfect veggie pizza.

The Crust - mini pita breads are the base for these pizzas. They are the perfect size and thickness to serve as a pizza crust with Greek flair.

The Sauce - keeping with the Greek theme, the "sauce" for these pizzas is store-bought hummus. Sure, you can make your own, but there are some great premade kinds in the grocery store. I opt for the plain kind, but feel free to use a flavored one!

The Toppings - this veggie pizza is topped with a simple Greek salad made with cucumber, tomatoes, red onion, olives and romaine lettuce that's tossed in an easy Greek vinaigrette. This salad would be great on it's own but is even better on this pizza!

The Cheese - what other cheese could be more perfect for these pizzas than feta? The salty, tangy cheese sends these pizzas over the top!

Start by warming the pita breads in the oven for a couple minutes. This allows them to soften up and create the perfect base for the pizzas.

Then, assemble the Greek salad. Combine the veggies in a mixing bowl then toss with the simple Greek vinaigrette. I love making vinaigrettes in mason jars, like I did in this Fall Panzanella Salad. Simply add the ingredients to the jar, screw on the lid and give it a good shake to combine.

To assemble a pizza, take a pita bread and spread it with a good layer of hummus. Then, top with about a cup of the Greek salad mixture and as much feta cheese as your heart desires. Cut the pizza into fourths and serve!

Can They Be Made Ahead Of Time?

Once assembled, it's best to serve the Greek Pita Pizzas immediately. The longer the salad is tossed in the vinaigrette, the soggier it will become. 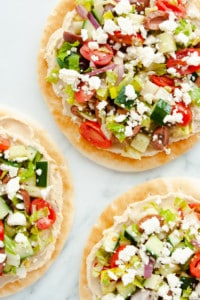 Add some other veggies - dice some red pepper, jarred artichoke hearts or a variety of other tomatoes to the salad

Choose a flavored hummus - garlic or red pepper hummus would add another pop of flavor to the pizzas! 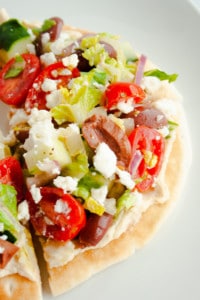 Have you made one of my recipes? I’d love your feedback on the comment box and star rating below the recipe! 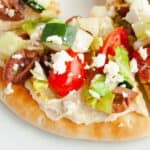