These Pork Chops with Mushroom Gravy are an updated version of a childhood favorite of mine made with a homemade version of canned cream of mushroom soup. 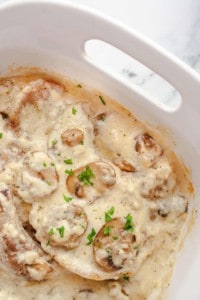 The Oldie, but Goodie

The original version of these Pork Chops with Mushroom Gravy  was on constant rotation in my house growing up. Brown some pork chops, put them in a baking dish, open 2 cans of condensed cream of mushroom soup and pour it over. Serve with mashed potatoes or egg noodles and dinner is ready.

I must preface the rest of this post with saying I still love this recipe! It's a quick meal that is still one of my favorites. I will not be offended if you quit reading the rest of the post and make the dish this way!

I love taking old recipes and putting a different twist on them. It may sound intimidating to make your own cream of mushroom soup, and even though it may involve a few more steps than grabbing the can opener, this homemade version could not be easier! When meal planning, I'm always looking for meals to make that include pork. It's a fairly inexpensive meat that when cooked correctly, can be so tender and flavorful.

To start the gravy, melt butter in a large skillet. Add sliced mushrooms and cook 4-5 minutes over medium heat until they are nicely browned. One of the perks of this version is the larger, more prevalent pieces of mushroom. I have some serious mushroom lovers in my house, so they  really appreciate this. 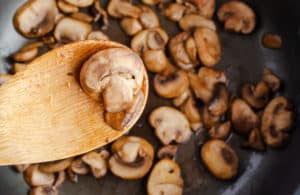 When the mushrooms are browned, sprinkle over the flour and stir to coat the mushrooms. Cook for 1 minute. Add the chicken broth, half & half & spices. Of course, you could use milk instead of half & half but your gravy may not be as thick as you'd like. Please just do yourself a favor and use the half & half. Bring gravy to a simmer and cook over low heat for about 5 minutes until nice and thick.

In the meantime, season pork chops with salt and pepper. In another skillet, heat with olive oil over medium-high heat. Add pork chops and brown about 2 minutes on each side. Place pork chops in 9x13 baking dish. I prefer to use the ½-inch thick pork chops because they cook up quick, and the bone-in helps the meat stay so nice and tender. Thicker or boneless pork chops could also be used, but the cooking time would likely have to be adjusted. 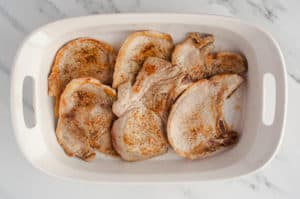 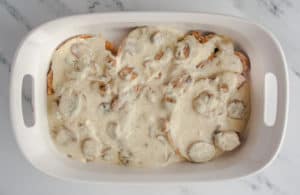 Pour mushroom gravy over pork chops. Cover with foil and bake at 375 degrees for 30-35 minutes until the pork is at least 145 degrees.

Serve these Pork Chops with Mushroom Gravy with a side of creamy mashed potatoes along with a vegetable for a delicious, hearty meal. My top pick is usually green beans. It seems this is always what we had with these pork chops growing up, so to me they just go hand in hand. I hope these Pork Chops with Mushroom Gravy become a new favorite in your home! 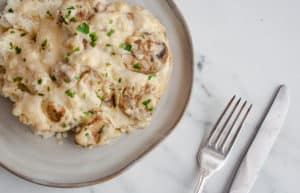 If you have a certain dish you've enjoyed since your childhood, I encourage you to cherish these recipes and share them with others. Also don't be afraid to put your own special twist on a recipe. This is how some of life's best memories are made and passed down to future generations. I'm a firm believer that some of life's best memories are made around the kitchen table. There might as well be good food to eat while at it! 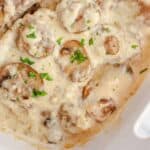