There's nothing more refreshing on a hot summer day than a tall glass of this Homemade Lemonade Iced Tea! The fresh squeezed lemonade is flavored with a mint simple syrup and the iced tea is so simple to make. Serve on it's own or spiked! 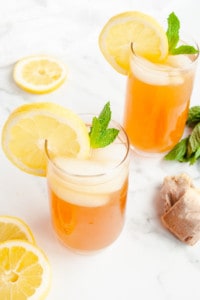 The countdown is on until summer begins here in Minnesota. There are only a few weeks of school left and things are starting to green up outside. The days are longer, leaving extra time to spend outside enjoying the weather. After a winter stuck inside and especially after the year we've all had in 2020 and into 2021, some extra vitamin D and fresh air is just what the doctor ordered as things start to approach "normal".

My family has a busy summer planned between spending as much time as possible at our family cabin in the north woods of Minnesota, to our first family road trip to Michigan. Throw in a family wedding and a few house projects and I have a feeling this summer is going to fly by. As a lifelong Minnesotan, I know how precious the summer months are. We have been fortunate to have an early spring this year, but some years it's possible to have one last snowstorm well into April. While I love living in a place that has four seasons, I am especially grateful for all summer has to offer. I am also soaking up this last summer before my oldest starts kindergarten in the fall! I think I'll be denial until I see the school bus drive away with her on it.

You may have heard of the drink like this called an "Arnold Palmer", which is a drink containing part iced tea and part lemonade. It's named after Arnold Palmer, a professional golfer, who is thought to be the inventor of this drink back in the 1960's. It is said that his wife often made iced tea for lunch, and one day he came up with the idea to add some lemonade to it. From then on, Palmer was often seen on the golf course with a thermos full of his concoction and began to order it at restaurants by describing what it was. People started hearing him order it and began to order it for themselves as an "Arnold Palmer". How fun would it be to have a drink named after you?

As with many summer drinks, there is always an option to add alcohol to create a grown-up spiked version. Adding vodka to an Arnold Palmer turns it's namesake to another golfer named John Daly. For this Homemade Lemonade Iced Tea, add a shot of your preferred vodka or bourbon for a delicious adult drink. 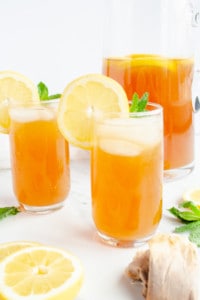 For the iced tea part of this drink you could reach for a bottle of premade iced tea but it's so simple to make your own! All you need are tea bags and water. You will follow the process just as if you were making a big batch of hot tea by boiling some water and steeping the tea bags for about 5 minutes. Then remove the tea bags and cool the tea completely. This mixture could also be made ahead of time and kept in the refrigerator.

You may have noticed an extra tea bag added to the ratio of 4 cups of water. I like the tea of be a little stronger than a regular cup of hot tea so this extra tea bag is the perfect amount for this iced tea.

The same goes for the lemonade as was mentioned for the iced tea. There are some great options for store-bought lemonade that is made with actual lemons, but there's something about making your own fresh squeezed that allows you to control the amount of lemon flavor and sweetness. Plus this lemonade is made with a mint simple syrup, giving the Homemade Lemonade Iced Tea a hint of mint flavor.

There are 3 basic steps to making this mint infused lemonade:

What Is The Perfect Ratio?

The perfect ratio for this Homemade Lemonade Iced Tea all comes down to personal preference. It is said that Arnold Palmer preferred his mixture ⅔ tea to ⅓ lemonade. The stuff you find is cans is called half & half (you can guess why), so there really is no right or wrong answer here. I happen to prefer the half lemonade to half iced tea ratio and it works perfectly for this recipe as it makes about 4 cups of each.

To make a drink you can either combine it all at once in a large pitcher or create custom drinks individually with your preferred ratio. Be sure to add ice to the glass to ensure your Homemade Lemonade Iced Tea stays nice and cold. Garnish each drink with a lemon slice or wedge and a mint leaf. This drink is so yummy and refreshing for a hot summer day! 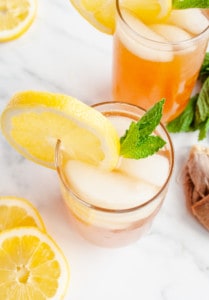 What Tea Is Best?

As you are probably starting to realize, there are not a lot of rules when it comes to making this Homemade Lemonade Iced Tea. Same goes for the kind of tea to use to make the iced tea. Traditionally, black teas are used when making the iced tea we normally think of. That being said, branching out to something like a peach flavored black tea or even a green tea will create a whole new flavor for the drink. Don't be afraid to switch things up! 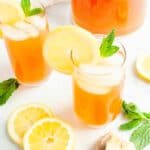 Adult version: Add a shot of your favorite vodka or bourbon to the Homemade Lemonade Iced Tea for a grown-up drink! Any ratio of tea to lemonade can be used, depending on your preference. I like mine half & half!

More recipes you may enjoy