These Apple Pie & Pumpkin Pie Smoothies are two fall smoothies that are proof that smoothie season doesn't have to end when cold weather comes around! 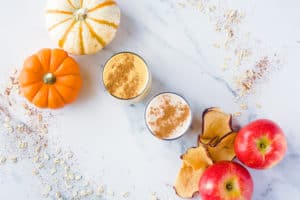 As a mom of a two and four year old, there are four words that I hear countless times a day that can send me lunging for the pantry in a mindless daze. "I want a snack". It doesn't matter if I've just finished the dishes from breakfast or they've eaten 2 bites of lunch 20 minutes ago, their need for a constant intake of snacks is real. 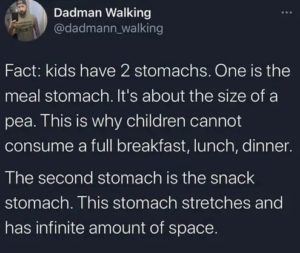 I am definitely not exempt from reaching for another pack of fish crackers or fruit snacks to ease their hunger pains, but I am always on the search for something new and exciting, with being on the healthy side an added bonus.

These Apple Pie & Pumpkin Pie Smoothies are sure to satisfy any snack craving, and you can feel good about the ingredients. This is the Tale of Two Smoothies.

I don't know any kid who's ears don't perk up when hearing "apple pie" or "pumpkin pie". It's likely you have most of these ingredients in your fridge or pantry on any given day. The beauty of smoothies is that they are so versatile that it is so easy to make your own creation.

These two Fall Smoothies have the same basic "base". Greek yogurt, oats, honey and ice cubes. I tend to usually have vanilla greek yogurt so that's what I used here. It gives the smoothies a little more sweetness, but still a great serving of protein. The oats add fiber along with acting as the "crust" part of the pie smoothie. Honey adds the perfect amount of natural sweetness, and the spices used drive the fall theme home.

For the Pumpkin Pie Smoothie, pumpkin pie spice is something you can find premade in the spice aisle, but making your own is a cinch! In a small bowl, mix together: 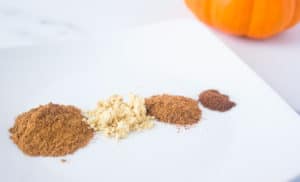 I like to use unsweetened applesauce for the Apple Pie Smoothie, as it lets me have a little more control over the sugar content. For a special treat sweetened or cinnamon applesauce would work great!

How to Make Fall Smoothies

The directions for either of these Fall Smoothies is pretty straightforward. Throw all the ingredients in your blender and blend! Mine usually take about 20 seconds. A good clue that your smoothie is well-blended is you will stop hearing the loud crunching of the ice as it gets broken into small enough pieces in the blender. 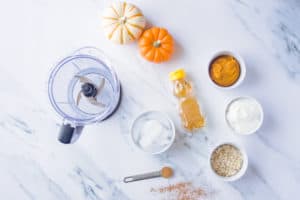 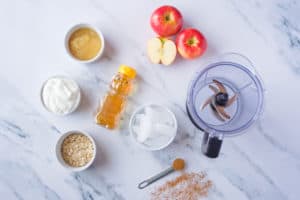 Each recipe will make 2 cups of smoothie. It is the perfect amount for my littles and I usually end up with a small glass to enjoy as well.

These Fall Smoothies are proof that smoothie season doesn't have to end when fall comes around. They will have you reaching for your plaid shirt and running to the nearest pumpkin patch or apple orchard! 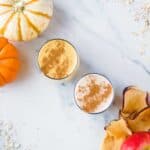 Pumpkin pie spice can be found premade in the grocery store, but it is so easy to make your own.  Mix well before measuring. This recipe makes just over 1 ½ teaspoons, which will be enough for 1 batch of pumpkin pie smoothies with some extra to sprinkle on top.