My favorite type of party food is when there is a spread of appetizers to graze on to my heart's content. Bite size apps and dips add such a fun variety that are meant to be enjoyed in any order. I feel these kind of parties really encourage good conversation and enjoying company. The flavors in these Apple & Goat Cheese Crostini meld beautifully together and create a beautiful appetizer to share. 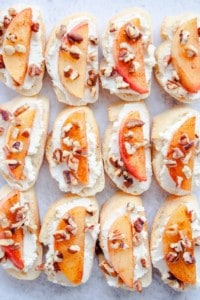 Start this recipe by toasting the baguette slices. Cut the baguette diagonally into ½ inch slices and place on a large baking sheet. Brush or drizzle each side with olive oil. Bake at 375 for 7-8 minutes.

While the baguette is toasting, place goat cheese and honey in a small bowl. Using a hand mixer, whip until smooth. 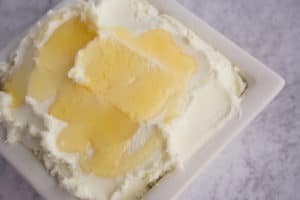 Next, slice apples and place in a skillet along with water, cinnamon and apple juice. Cook over medium heat stirring occasionally for about 5 minutes. The apples will start to get tender but will retain their shape. A cinnamon sauce will form and cook into the apples giving them great flavor. Remove from heat and allow to cool for a few minutes. 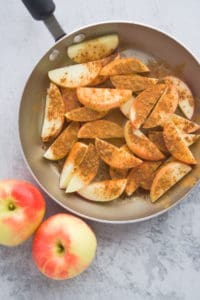 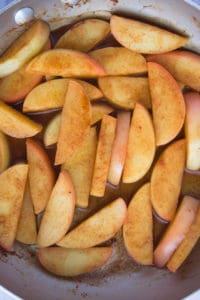 To assemble, spread a nice layer of goat cheese on a baguette slice. Think about the amount of peanut butter you'd typically put on toast. Top with an apple slice and sprinkle with chopped pecans. You may have to help the pecans stick on by placing them more on the goat cheese. 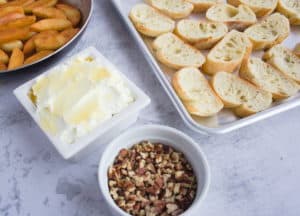 Prepping the Apple & Goat Cheese Crostini Ahead of Time

When entertaining, I love a recipe that allows for much of the prep to be done ahead of time. This saves so much time and lets you enjoy more of your party rather than being stuck in the kitchen.

The components of the Apple & Goat Cheese Crostini can be made ahead of time and assembled at party time. Toast the baguette slices and store in a plastic bag. Whip the honey and goat cheese together and keep in the fridge. The skillet apples can also be cooked, cooled and kept in the fridge until ready. I would take the cold ingredients out of the fridge 30 minutes before you are ready to assemble the crostini. Goat cheese along with other cheeses taste better at room temperature. 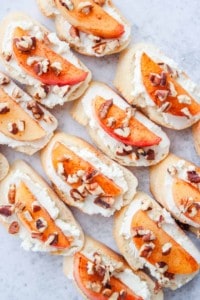 Add these Apple & Goat Cheese Crostini to your next party menu! The presentation is pretty and the flavor is even better! 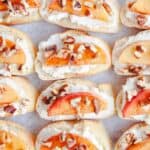 Hi, I'm Ashley! Welcome to The Darling Apron! I'm a wife, mom, recipe developer & photographer who uses food as her love language. I believe some of life's best moments happen when gathered around the kitchen table & I love creating memories through delicious food. I hope this space inspires you to do the same!